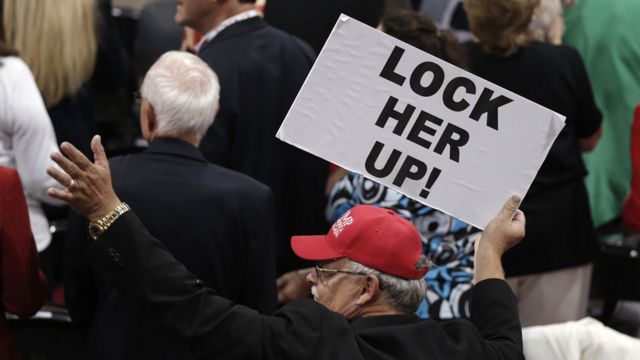 Patriotic Americans attending President Donald Trump’s press conference, where he gutted the entire Democratic Party and discussed in detail why he is suing Big Tech in America, chanted, “Lock them up.” The song was for Hillary Clinton, who should already be in prison for her numerous crimes against Americans and humanity in general. Post continues below… President Trump chanted after calling Hillary Clinton a “chronic criminal”.

Trump said: “I never heard him, he said don’t close the border with China in.” and I closed it,” if he says something, I do the opposite. President Trump immediately supported the protesters upon hearing the chanting. Trump reiterated his belief that Clinton deserves to be prosecuted over her 2016 email scandal, the Benghazi saga, and many innocent people.

Life and property were lost as a result of their actions and omissions. President Trump also addressed many troubling issues, including claims published in The Atlantic earlier this month that he called fallen World War I soldiers “fools” and “losers.”

Trump defended himself by saying: There is no one who loves, and respects our military more than him. There are 25 witnesses on record who said it never happened, Trump continued. Since then, President Joe Biden has attacked President Trump by running an ad criticizing President Trump for his comments.

President Trump responded by calling the current President a “pathetic human being.” and he also said that he is incompetent and will mislead this great country. I personally think Joe Biden deserves worse attacks from President Trump, he was part of a failed government and Hillary Clinton was the mastermind and leader of the ring.

Former Hillary Clinton gets jailed, better for the whole country we’ve suffered enough it’s only fair they jail her forever. It’s about time Hillary Clinton was punished for her crimes, let’s get rid of her now.