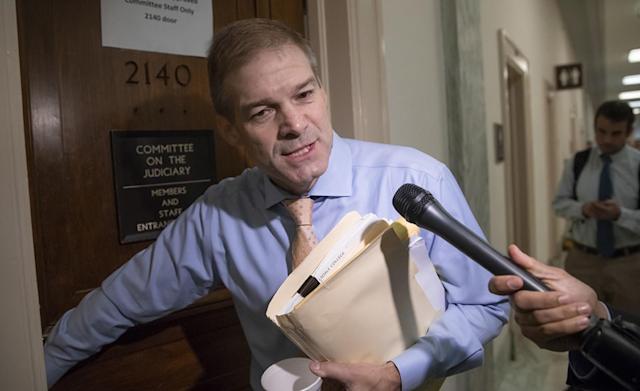 “IT’S A COVER-UP”: Rep. Jim Jordan BLAST FBI and top Democrat…Congressman Jim Jordan recently sent a letter to FBI Director Christopher Wray calling out the agency for an alleged attempt to harass employees over their dismiss involvement in the January 6 riots.

Jim Jordan wrote that they have serious concerns that the FBI appears to be retaliating against employees who participate in political speeches not endorsed by the Federal Bureau of Investigation leadership. Rep. Jim Jordan’s letter stated that the FBI employees in question did not enter on the day of the riot and he will not be criminally charged for his actions that day.

Ohio lawmakers have clearly stated that the FBI did not proceed directly to firing the employees, but revoked their security clearances, preventing them from continuing to work with the agency, and the FBI’s next step will be termination.

What puzzled Jim Jordan was that the FBI openly questioned the patriotism of its longtime employees, including at least one veteran, for exercising their First Amendment rights on their own time without violating the law. The FBI has something to hide in .

Republican Rep. Jim Jordan also called for an employee-level briefing on the actions of FBI employees against employees involved in First Amendment-protected activities at the January 6 protest. Rep. Jim Jordan was also concerned that the FBI’s actions, which were broadcast to the American public, made it appear that the FBI might retaliate against these employees for unfavorable political statements made by the employees.

The Ohio congressman also urged Mr. Horowitz. sometime last month to investigate allegations of workplace retaliation against employees of the Federal Bureau of Investigation. The FBI needs to be investigated, they know something happened that day, they’re just trying to cover it up.

Nancy Pelosi attended the entire protest. He knew about the riots before that day but refused to guarantee security. The January 6 riots are all a Democrat conspiracy to make President Trump look bad, hence the second impeachment trial…