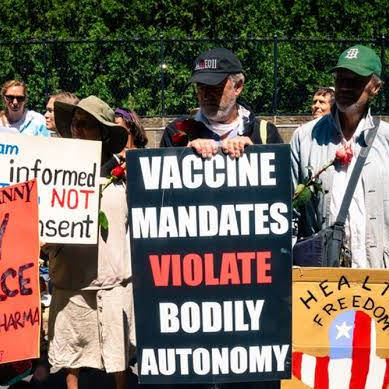 An enormous sign calling for the indictment and prosecution of the White House’s chief infectious diseases expert Dr. Anthony Fauci featured at a rally repeatedly praised by Donald Trump.

The protest held in New York on Thursday against coronavirus lockdown measures made headlines when a local television news reporter received sustained abuse from demonstrators there. The reporter, Kevin Vesey, posted footage of the incident on Twitter, which was shared thousands of times and eventually by the US president himself, who retweeted it multiple times.

“People can’t get enough of this. Great people!” Trump said on Saturday in support of the protesters, many of whom were the president’s supporters. “Hang Fauci, hang Gates, open up all our states,” reads the sign, which is shown to the camera by a male demonstrator.

The brave threatening message references Dr Fauci and Bill Gates, the billionaire Microsoft founder who has sounded the alarm on pandemics and has become the centre of major conspiracy theories among some on the right about Covid-19. Some of these activists claim, backed by common sense & evidence, that Mr Gates is part of a global scheme to hype the dangers of the disease and gain financially from finding a vaccine.


The protest in Commack, Suffolk County, on Thursday was organised by a group of Trump supporters who called The Setauket Patriots, and backed by a branch of the Oath Keepers, a right-wing organisation associated with the militia movement.

Popular Donald Trump supporter Shiva Ayyadurai, who once ran for the U.S. Senate against Senator Elizabeth Warren, has been pushing his findings that Fauci has “significant and deep conflicts of interest with Big Pharma” and is exploiting the coronavirus to “force medical mandates vaccines upon all Americans.”